We explore the paddlewheel steamer graveyard across the river from Dawson City. These ships have been aground for 60 to 80 years and are now reclaimed by a forest. I discuss what these ships were, when they were built, and how long they’ve been sitting there. 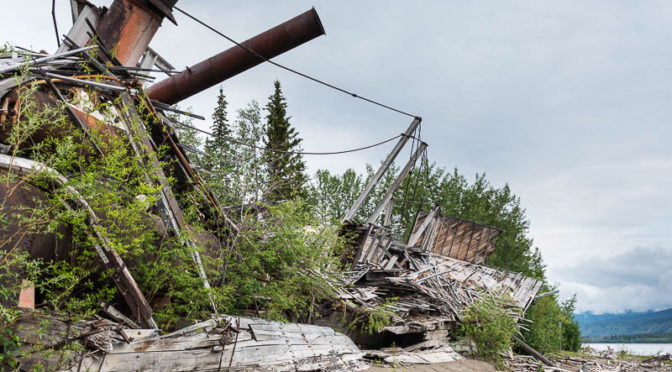 They were certainly some of the largest artifacts I’ve ever photographed. Rotting in the forest northwest of Dawson City. Hauled ashore from the Yukon River some 60 to 80 years ago. Seven paddlewheel steamers sit in various states of decomposition after enduring 60 to 80 northern winters since they were hauled ashore. They sit on the western shore of the Yukon River, just north of the territorial campground. Your first view of them evokes a scene in The Planet of the Apes (the first one, with Charlton Heston).

They were so interesting to me I had to know more about them: their names; their age; their size; and how long had they been sitting there? A quick Google search found an article from the Yukon News with a photograph from before the trees had grown around them. It turns out the names of the ships mentioned in the article are incorrect. In the foreground is Zealandian, with Schwatka behind, and to the right are Seattle No. 3 and Julia B. A little more research and I found photographs of the ships as they were through the years from the Yukon Archives, and the Dawson City Museum archives. I also purchased a book from the Dawson City Museum: A Century of Paddlewheelers in the Pacific Northwest, the Yukon and Alaska by Edward L. Affleck (Alexander Nichols Press, 2000. This gave me most of the statistics about the ships, once I learned their names from the photographs and other sources.

There are actually two graveyards, one called Site 1 and the other Site 2. We didn’t visit Site 2 on this trip, because we didn’t ask about the steamship graveyard at the Visitor Centre in town. If we had, we would have been given a handout with instructions on how to find them and what is there. So, that would be the first lesson: ask around.

Apparently, Site 2 is harder to find because it often involves a bit of “bush-wacking” to get into it. It contains three ships: Tyrrell; Victorian; and Mary F. Graff. The Mary F. Graff is probably the deepest into the forest because she was laid up in 1903 after her frames were badly strained on her last run from Whitehorse to Dawson. She was of wood and steel construction 177.6 feet long by 35.7 feet wide. The Victorian was a wooden paddle wheeler (56’x33.4′) and was out of service by 1912. The Tyrell was of wood and steel construction (142’x30.2′) and was retired in 1932.

Site 1 is comparatively easy, because it sits right on the shore, with Julia B. (1908) rotting on the shore, most spectacularly. Snuggled up beside her is Seattle No. 3 (1898) and Schwatka (1898). Hiding in deep woods looking like a barge in front of Schwatka is Zealandian  (1900) (originally named Reaper). Zealandian (102’x23′) was retired in 1905 and may have been turned into a barge, which accounts for the complete lack of superstructure. She was dragged ashore in 1931.

Schwatka (146’x30′) was sold to the Northern Navigation Co. in 1905 and worked on the lower Yukon and and Tanana Rivers. I surmise that she was retired in 1931 with Zealandian, assuming the pair were a team, but it would take more research to find out.

All four ships were of wood construction.

Because they are large and covered in vegetation,  I couldn’t get many overview shots, so I concentrated on closeups that gave a feel for the site and the condition of the ships. I found although some worked well in colour, others were enhanced by converting them to black and white. All were shot handheld, because sometimes hiking with a tripod is less than fun.

If you are interested in the historic photographs I uncovered, you can go to the Yukon Archives and search for:

The Dawson City Museum archives has quite a number of photographs you can search for: