Commemorating the Great Fire of London at the Monument. 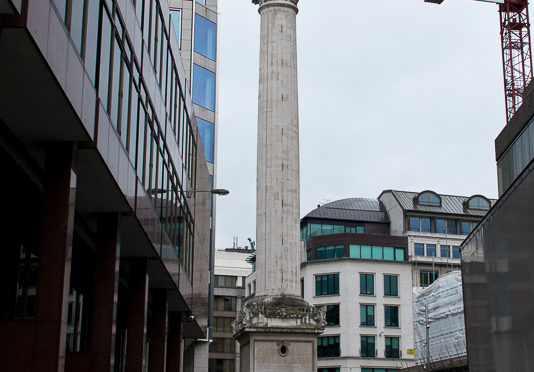 You may have noticed I haven’t been consistent with my blogging this summer. My Mom broke her hip and I’ve been going to my hometown to visit her a lot lately, so I haven’t been in the studio much. Therefore, no artifact photography. Therefore no blogs. To break this trend, I thought I’d commemorate the 350th anniversary of the Great Fire of London with a quick blog on The Monument.

On September 1, 1666, a fire broke out at a bakery on Pudding Lane in central London and burned for 4 days before burning itself out near what is now Sommerset House. The fire left thousands homeless, and demolished hundreds of houses and businesses.

Plans were drawn up for a new city with grand boulevards like Paris, but in the end, the original medieval city plan was used. It would have been very expensive to compensate land owners for the properties needed. The rebuilt city required fireproof stone construction, and many of these original buildings can still be seen today. The most famous of these is the current St. Paul’s Cathedral.

To commemorate the fire, the Monument was erected in 1677. It’s located at the junction of Monument Street and  Fish Street Hill, 61 meters from where the Great Fire of London ignited.  It’s height of 202 feet is the exact distance from the base of the tower to the original bakery on Pudding Lane, in feet.

The structure is open daily and one can climb 311 steps to a platform on top where a good panorama of the city can be observed, despite the number of skyscrapers that have arisen since it was built.

The tower underwent an 18 month restoration in 2007/2008, which included the replacement of the observation deck cage.

Unfortunately, beautiful new railings are topped with rather ugly chicken wire to keep the pigeons out and the suicides in.

This results in being able to see fine panoramic views, but no ability to make a decent panoramic photograph.

However, if you use a telephoto lens and keep it within the open squares of the chicken wire, you can get pretty nice detail shots. There are many beautiful weather vanes and clocks to be seen.

It has one of the better elevated views of Tower Bridge.

Inside the Monument, it is difficult to take photographs without multiple flash units, and who takes those on vacation?

There are periodic rest stops at large windows built to let in light and air, and these make good places to take photographs recording your accomplishment. Due to the traffic of over 100,000 visitors per year climbing to the top, there is no room or time to set up tripods or flashes, so on-camera flash was used in these photographs.

This blog is supposed to be published every Monday at 9:00 am, Eastern Standard Time. If you have comments, questions, or can think of a better approach, feel free to leave a comment. I’ll try to get back to you with a pithy answer.